Gaze into the heart of your practice: Drishti

Gaze into the heart of your practice: Drishti

There are nine drishti, or gazes in the Ashtanga yoga tradition. Each one corresponds to a specific point of focus. By incorporation the drishti into your yoga practice you will deepen your awareness and connection with the Divine.

Drishti is a Sanskrit word that means ‘gaze’ and is closely connected to Dharana and Dhyana, the 6th and 7th limbs of The Eight Limbs Yoga. In Dharana, we work with cultivating a single point of concentration in preparation for meditation (Dhyana).

In yoga practice, drishti or placing our gaze into a specific point helps us, physically to find balance and stability. Mentally helps us focus and steady the mind and turn our awareness inwards, towards the internal movements, while finding the external stillness. The use of drishti integrates our asana practice. After all, where your gaze goes, your attention goes and the life force (prana) follows.

Drishti is a quiet and gentle gaze in quality. There are 9 drishti in yoga and each asana has in the Ashtanga Yoga Tradition, an associated drishti point. Knowledge of the various drishti is a valuable addition to deepen your yoga and meditation practice.

Where your gaze goes, your attention goes and the life force, Prana, follows.

Angusthamadhye Drishti rests on the middle of the thumb, between the nail and the first joint. We use this Drishti for example in Utkatasana (chair pose) and Urdva Hastasana (upward salute).

Nasagra Drishti rests on the tip of the nose. In Chaturanga dandasana (four-limbed plank pose) and Urdva mukka svanasana (upward facing dog). It is also used in inversions like Adho mukka vrksasana (handstand) and backbends like Chakrasana (wheel pose)as well as in seated meditation pose like Padmasana.

Hastagre Drishti rests on the hands or tips of the fingers. Examples are Uthita trikonasana ( extended triangle pose) and Uthita parshvakonasana (extended side angle pose).

Parsva Drishti, Left and Right Side of us, considered to be two different drishti depending on which side we are looking. For example Ardha matsyendrasana (half lord of the fishes pose), depending on which direction you are turning, the gaze would be an extension of your spinal twist, your gaze continuing the spiral of the body beyond the crown of the head.

Urdhva Drishti looks outward as in Virabhadrasana B(warrior two pose) and has an expansive feeling of gazing into infinity.It is an all-encompassing gaze, fearless and compassionate when needed, just like a true warrior.

Nabhi Chakra Drishti brings the gaze to the center of your being, the navel. Each time we come into Adho mukka svanasana (downward facing dog), we bring the gaze to our navel, to our center. This is where Manipura chakra, our powerhouse resides.
Nadhi chakra is also known as the ‘magic circle’ in Sanskrit.

Padayoragre Drishti is used when bringing our gaze to the tips of our toes as in Janusirsasana )head to feet pose) as well as in seated forward-bends. This drishti allows the spine to lengthen and extend fully from the hips all the way out through the crown of the head rather than rounding our lower back.

Bhrumadhye Drishti resides in the middle of the space between the eyebrows, in the third eye center. We use it mainly in meditation. The purpose of this gaze is to bring the awareness inwards, raise consciousness. It is said to stimulate the optic nerves, sharpen concentration, activate the third eye and calm the mind. It is used in Matsyendrasana (lord of the fish pose)

When we incorporate the use of drishti into our yoga asana and meditation practice we are expanding our awareness and consciousness. We move deeper within and refine our practice, integrating our being and connection with Self and the Divine. 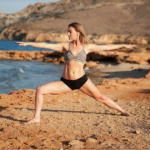 Grounding: get Grounded and down to Earth 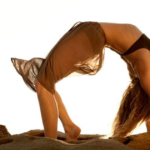 Chakrasana: beyond the physical body

Sorry, the comment form is closed at this time.